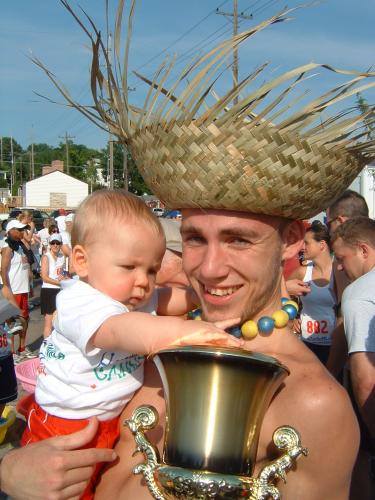 At the Jackson Hill Foundation, we honor our son’s legacy by giving families of pediatric families tools to keep them healthy and well during hospital stays. We do this by supporting the development of Jackson Hill Wellness Centers at pediatric hospitals across the country.

Our journey has allowed us to meet many families, like the Seely’s, who benefit from being able to use the Jackson Hill Wellness Center at Randall Children's Hospital in Portland. More recently in St. Louis, we have also met families who could have benefitted from a wellness center but who did not have access to one when their child was in the hospital.

One of these families is the Aitkens. Last month, Mike Aitken graciously shared his family’s story with us. The hero of their story is his son, Runner.

Runner began having seizures when he was eight months old. In September 2006, right before his first birthday, he had a long seizure that didn’t respond to normal treatment. The Aitkens took him to St. Louis Children’s Hospital. Over the next year, the family was in and out of the hospital, often spending many months at a time there by Runner’s side. In 2008, he was finally diagnosed with Peridoxine Dependent Epilepsy (PDE), a rare seizure disorder.

Though the seizures left him unable to talk or move, Runner’s health improved significantly by 2011. This allowed Mike and Runner to return to a favorite father-son ritual — running. The two had first started running together when Runner was just a baby. Now they logged hundreds and hundreds more miles together, Michael still pushing Runner in a stroller. The experience was therapeutic for both of them.

The Aitkens were encouraged by continued improvements in Runner’s health in 2013 and 2014. However, in November 2014, Runner was unexpectedly diagnosed with a rare liver cancer His doctors gave him only six to eight months to live. Through the Make-A-Wish Foundation, the family made plans to travel to Disneyworld in January to grant Runner’s final wish — to run the Disney Marathon with his dad.

Unfortunately, the trip was cancelled due to Runner’s health, but thanks to the Make-A-Wish Foundation and the St. Louis community, Michael and Runner were able to enjoy one final run together in the Frostbite 20K. Cheered on by hundreds and hundreds of supporters, Runner and Michael finished 14th and 15th in the race. Sadly, two weeks later, Runner passed away.

Today, Mike honors Runner’s legacy through running and giving. You’ll often see him sporting his Team Runner apparel in races around St. Louis and, each year, he organizes a run for Runner’s birthday to raise money for the Make A Wish Foundation.

We are thankful at Mike will be joining us in February at Run and Run S’more to help support the development of a Jackson Hill Wellness Center at St. Louis Children’s Hospital. Like us, Mike recognizes the need to give families of pediatric patients tools to keep them healthy and well during hospital visits: “We will be forever indebted to St. Louis Children's Hospital for the fantastic level of care and compassion they provided Runner and our family with during the 9 years they were a routine part of our lives. The one thing missing from our experience there was the opportunity for parents to work off the high level of stress and anxiety that accompanies having a child in the hospital. It is much more difficult to advocate and be there for your child as a parent if you aren't at your best physically and emotionally. The new Jackson Hill Wellness Center at St. Louis Children’s Hospital will provide parents and guardians of children receiving treatment a long-awaited outlet for their stress that didn't exist before. This will allow us to provide our children and families with the emotional support they need during those difficult times.”